Reflection on World Meeting of Families

Reflecting on the busy week spent participating in the World Meeting of Families in Philadelphia, I found myself feeling very thankful to have been blessed with meeting many new faithful interested in the mission and programs of St. Gianna Physicians Guild as well as having shared a lot of time and activities with the youngest daughter of St. Gianna Beretta Molla who is a close friend.

St. Gianna was named the patron saint of the World Meeting along with St. John Paul II. The youngest daughter of St. Gianna, who was born as a result of her mother’s generous sacrifice to risk a problem pregnancy and bring her baby to term, considered it the second most important honor given to her mother after her canonization on May 16, 2004. For this reason Gianna Emanuela, joined by a cousin and seven friends, traveled to Philadelphia to participate in the memorable events. St. Gianna’s son, Pierluigi, and his wife Lisi also attended. 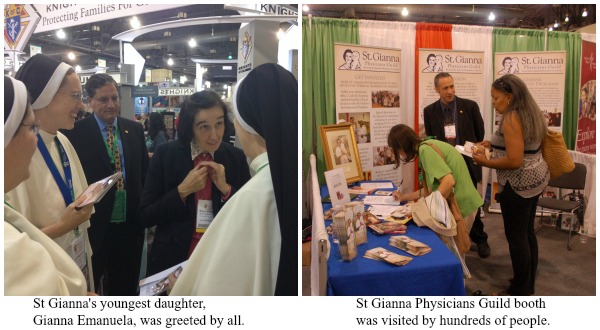 The Molla family members are very good friends and dedicated supporters of Catholic Action for Faith and Family, and St. Gianna Physicians Guild. For this reason I was very involved with organizing Gianna Emanuela’s schedule while she was in Philadelphia.  One of the most prominent booth spaces was that dedicated to St. Gianna. The Society of Saint Gianna Beretta Molla, based in Warminster, PA just outside of Philadelphia, generously raised money to sponsor and staff the booth. It was a place where participants from around the world could meet Gianna Emanuela and learn about her saintly mother. Prayer cards with second class relics of St. Gianna were distributed as well as photographs, rosaries and other religious items.

Gianna Emanuela had also brought a variety of relics of her mother which were placed on display for veneration in the Philadelphia cathedral, the Basilica of Saints Peter and Paul, throughout the week. Most prominent among them was St. Gianna’s wedding dress and shoes. It was noteworthy that the 60th wedding anniversary fell on the day the dress was on display.

The St. Gianna Physicians Guild booth was prominently located in the main exhibit hall. Throughout the conference thousands of people visited the hall and Guild directors rarely had time to rest as so many people wanted to hear about the work and mission. Many doctors signed up for the Enshrinement Program and wanted to discuss at length the many challenges facing them in today’s culture. Holy cards, booklets on the life of St. Gianna as well as membership pins were distributed to those who wanted to participate.

Throughout the week, there were interviews with Gianna Emanuela on EWTN television and radio as well as other print media to talk about St. Gianna and the project we are undertaking to restore St. Gianna’s home and develop it into a shrine. The two of us joined Doug Keck and Johnnette Benkovic on EWTN Television and were interviewed by Teresa Tomeo on EWTN Radio.

Escorting Gianna Emanuela from place to place was sometimes quite challenging as she was a celebrity at this event. She and her two surviving siblings are the only children in history to have their parent officially proclaimed a saint during their lifetime, and the people knew that. Wherever she went people wanted pictures, autographs, hugs and to tell her their story of how her mother had intervened in their lives. This was especially manifested in the many children she met named Gianna.

On Monday after the weekend events with the Holy Father were passed and the city was still lively with pilgrims, I went with a Greg Teufel of the Society of St. Gianna to pick up Gianna Emanuela and her entourage to take them to the airport. After collecting the relics from the cathedral and assisting at Mass, we went with them for lunch nearby. I was touched with a surprise presented by Gianna Emanuela to St. Gianna Physicians Guild for use in our apostolate. She gave me a silk scarf that belonged to her mother. This second class relic will be displayed at public events for veneration. 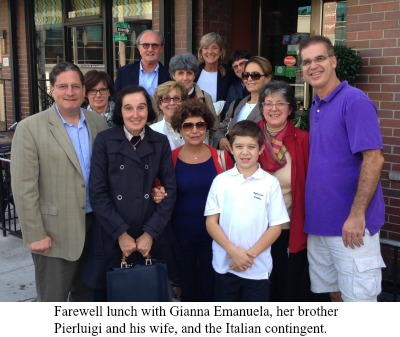 On the way to the airport everyone was happy and reminiscing of the events of the week. As the last of the travelers had dispatched their bags and all were ready to pass through security, I called Gianna Emanuela aside and asked her if she could record her final thoughts about the week for me to share with our friends and members.

Comments from Gianna Emanuela at the conclusion of the World Meeting of Families:

Thomas McKenna: Gianna Emanuela, you spent one week here at the World Meeting of Families. Many people were inspired by the example of your saint mother. What is your impression of the week and how do you see people inspired by your mother.

Gianna Emanuela Molla: Throughout the week I met many people who told me how much they love my mom. I met many young girls named Gianna, after my mom. I also met many people who told me that they had received graces through my mother’s intercession. As I return home to Italy I am very happy and I thank God with all my heart for this week’s experiences and I consider this a special grace from God. I can say that throughout my stay here in the United States I felt so much at home. I felt like I was in a large family where so many people love my mother. I also feel thankful that I had the opportunity to speak on television and radio about my mother and my father. And I will take home with me, in my heart and in my prayers, all the people I have met.