Spiritual Retreat for Physicians in Phoenix

In September, St. Gianna Physicians Guild conducted a spiritual retreat for Catholic physicians from the diocese of Phoenix. It was held at the Redemptorist Retreat Center in Tucson and was co-sponsored by the diocese and was strongly supported by Bishop Thomas Olmstead. Cindy Leonard, Director of the Office of Natural Family Planning for the diocese coordinated the event. Fifteen doctors and three medical students attended.

Never before have Catholic physicians been confronted with such challenges to their practicing medicine and practicing their Faith. With the pervasive and constant assault on the Catholic Church and society in general, the need for all Catholics to stand strong in support of their sacred values, is more important than ever. Among them and of great importance is that doctors have clarity about God’s call for them and how best to respond.

The two day retreat is a new program of the Guild and was developed by Dick and Martha Lyles in conjunction with Thomas McKenna and is based on the Lyles inspiring and insightful book Answer Your Call: Reclaim God's Purpose for Faith, Family, and Work. Dick Lyles was the retreat master and Fathers Ron Hurl and Zygmunt Mazanowski participated and served as chaplains.

This weekend Spiritual Retreat gave each doctor an opportunity to discern his or her call in the context of the New Evangelization and the virtuous writings and example of St. Gianna Beretta Molla, a modern day saint who was a devout wife, mother and physician and who referred to the vocation of a doctor as a “Priestly Mission!” The retreat also provided an opportunity to gather insight and set goals that help physicians respond to the call of the New Evangelization in their personal as well as in their professional lives.

“The retreat is a spiritually based, yet a practical opportunity for doctors to think through the question “what am I called to do to make my practice magnificent in the eyes of God and achieve the level of impact in the world that God has prepared me for,” explained Dick Lyles. 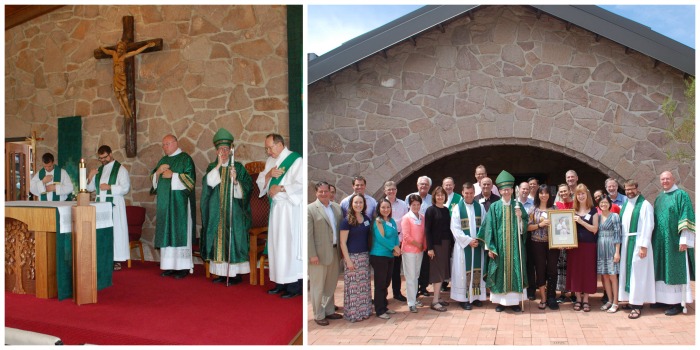 Thomas McKenna pointed out that “Catholic physicians need a way to discern God’s unique call for them as well as a way to determine how they can play a role in the New Evangelization. Physicians are uniquely situated to play a key leadership role because of their esteemed position in our culture,” he continued. A major benefit of this retreat is that it affords doctors a tangible way to nurture their own spirituality while positioning them as leaders in The New Evangelization.

The retreat starts by introducing people to the premises of the New Evangelization and a framework for discerning one’s call. The USCCB’s goals for the New Evangelization are then reviewed with a focus on steps individuals and groups can take to support them. Then participants evaluate their personal gifts, ways to embrace God’s grace and, finally, how to discern God’s individual call for each of them.

A highlight of the retreat was the Mass celebrated by Bishop Olmstead. The weekend also provided the opportunity for local physicians and medical students to build friendships that will support them as they return to their daily lives. The Guild is reaching out to other dioceses to organize future retreats. For more information contact info@StGiannaPhyscians.org.