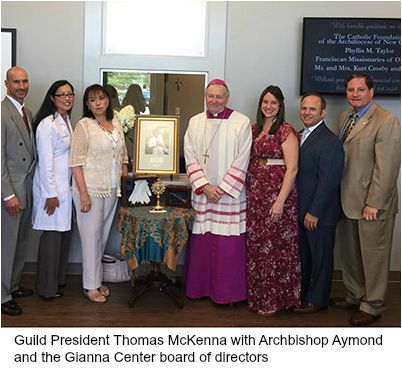 Physicians, benefactors, clergy, patients, and many others involved in establishing the new clinic were present for the first of two grand opening events. Archbishop Aymond, who serves as the chairman of the board, welcomed everyone in the lobby of the clinic. He expressed his gratitude to Divine Providence and those instrumental in making the project a reality.

“As St. Gianna sacrificed her life for the life of her child, it is in that spirit that this center is opened and stands as a great sign of pro-life and for respect for life,” Archbishop Aymond stated. “And we pray for all of the women coming here seeking medical help” he continued.

John Schembre, a pharmacist and president of the center, welcomed everyone and introduced Dr. Anne Nolte, founder of the first Gianna Center in New York City. She explained “what we have seen in these past six years in the clinics that have opened across the country is that women are seeking these services regardless of their faith traditions because it is just good medicine. In just sixteen months this clinic went from being an idea to a brick and mortar reality.” 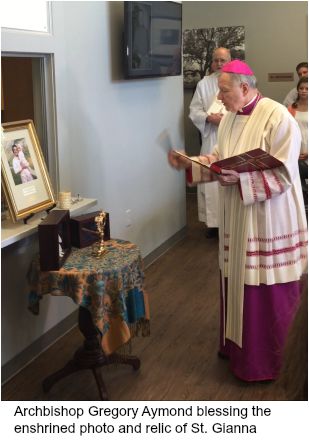 The idea of opening the clinic was inspired by Laura Kiper, a local resident. Having undergone secondary infertility struggles for many years, along with multiple miscarriages, she came across an affordable method of achieving pregnancy that was in line with the teachings of the Catholic Church and respected the dignity of the husband and wife. Although she had been told that only option of achieving pregnancy would be through in vitro fertilization, the Gianna Center introduced the Creighton method to her as a more effective way of resolving her infertility..  After only a few months of learning this method and working closely with her practioner and medical consultant, she was able to conceive and carry to term her second daughter.

As part of the inauguration Archbishop Aymond led the faithful in a special “Enshrinement Ceremony” sponsored by St. Gianna Physician’s Guild.

The ceremony consisted of prayers, responses and a blessing of the framed picture containing a second-class relic of St. Gianna Beretta Molla, provided by the Guild is enshrined in the facility. “Its presence serves as a model and source of inspiration to the doctor, staff and patients,” stated Thomas McKenna, the founder and president of the Guild, who traveled from San Diego to participate in the events. 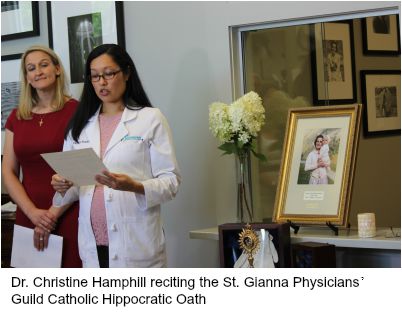 During the ceremony the medical director, Dr. Christine Hamphill, read aloud the St. Gianna Physicians’ Guild Catholic Hippocratic Oath before she signed it and Archbishop Aymond signed as a witness. The oath is a statement of fidelity to Catholic teachings the Guild requires all medical directors to affirm as a condition to enshrine the picture and relic.

Dr. Hemphill, one of only 13 physicians in the United States who has completed a fellowship in medical and surgical NaProTechnology at the Pope Paul VI Institute with Dr. Thomas Hilgers, a co-creator of the Creighton Model FertilityCare System.

These treatment systems are natural alternatives to in vitro fertilization (IVF) that do not result in multiple births and satisfy any religious concerns. They also are as effective as IFV, without the use of artificial means. 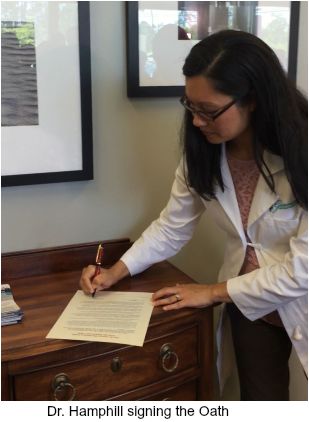 “The Gianna Center offers an alternative for women who are frustrated by their current health care, a frustration that often compels them to avoid or be discouraged from seeking traditional OB-GYN treatment because they don’t want to be pressured into contraception, sterilization or abortion,” Dr. Hemphill said. “Gianna offers another, better way for those women to meet their health needs.”

The evening celebration took place at St. Peter Catholic Church and was open to the public. Thomas McKenna gave a presentation on the life and virtues of St. Gianna, sharing many details about her which he had learned firsthand from St. Gianna’s family with whom he is personal friends.

On display for veneration were several relics under his care. The relics were a lock of hair, a pair of gloves and the fetus-scope St. Gianna used to listen to the heartbeat of babies in their mothers wombs. 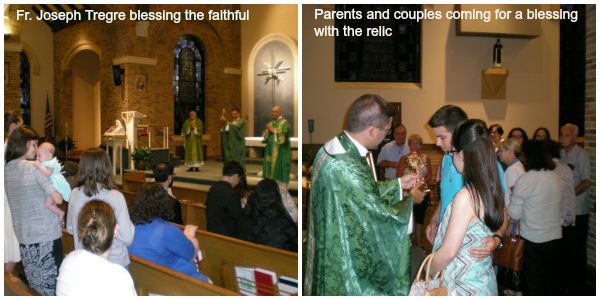 Following mass all were invited to a lovely dinner reception in the church hall provided by the network of families supporting the center. Fr. Tregre remained for some time in the church blessing the many families and expectant couples with a first class relic of St. Gianna.

Click here to sign petition to US Congress to defund Planned Parenthood and give the money to clinics, like the Gianna centers, that truly care for the health of women and their children, both born and unborn